A Lifter Reflects On Competing As a Novice

This weekend we have quite a few trainees who are competing for the very first time at the Starting Strength Fall Classic. Most of our lifters wanted to get strong in order to enhance the other parts of their lives: their health, other sports and hobbies, their ability to keep up with their children and grandchildren. Persuading novice trainees that a meet is not only a fun thing to do, but beneficial to their training, is sometimes a challenge! I wanted to get some perspective from a novice lifter on their first meet. I asked friend of Bay Strength and former Bay Area resident Annie Paladino, now living in Seattle, to reflect on her first meet a year ago, as she heads into her second meet this weekend.

Can you tell me a little bit about how and why you started lifting?

I have zero—and I mean “petitioned to make dance class count as a PE credit in high school” zero—athletic background prior to lifting. I read Starting Strength 2nd Edition when I was in college, in 2009. My then-boyfriend (now-husband) wanted to learn how to strength train effectively, and copious internet research led him to SS. I hated mindlessly chugging away on the elliptical, so I gave it a shot and muddled through a less-than-ideal LP over the next 9 months. I went from not being able to squat the bar to squatting somewhere around 135. After graduating, I didn’t really do much with a barbell for the next 4-5 years. Then my husband gave me a pair of lifting shoes, and for whatever reason, that flipped the switch to get me back into training. It’s hard to say exactly why it stuck this time. Part of it was the realization that, instead of trying to make my body smaller/lighter in order to be more agile/athletic/efficient/elegant (since I am a performer and theater artist, this is important to me), making my body stronger was infinitely more effective, useful, and obtainable. I’m sure I said to many people around that time, “If I’m going to have ginormous legs, might as well make them strong as hell.”

What made you choose to sign up for the Starting Strength Fall Classic? A lot of novices think they need to wait until they’re more advanced to do a meet. Why did you want to do it?

It was somewhat of a whim, honestly. I wish I could say exactly what made me decide to take the plunge. It was literally my first participation in a competitive sporting event, ever! I suppose the Fall Classic hit this sweet spot for me, as an unathletic, formerly timid/fearful person: relatively small, no league affiliation to commit to, relatively inexpensive, nearby (no travel needed), with lifts that I already was using in training.

I do place substantial value on doing things that one is bad at, and I think that it’s important for everyone to do things outside their comfort zone every now and then, especially when there’s no actual danger involved. Yes, competing is scary, but it’s not literally dangerous. Strength training has made me really believe in practicing small acts of courage regularly (no matter how silly they might be “objectively”) in order to build mental fortitude, and capacity for more meaningful courage.

How did you prepare? I think a lot of first time competitors are worried about the preparation, and about the competition itself. Did you have some fears about the meet?

I had done very little work with singles prior to the meet. My first heavy deadlift single had been a couple months before, and my first time trying a squat single was literally weeks before the meet. I staged a “mock” meet for myself a couple weeks prior, partially to get used to the timing (long-ish waits between attempts), partially to practice while wearing a singlet (sausage legs FTW), but mostly to  try some heavy singles, as I really didn’t know where my maxes were.

I didn’t really have any fears, but I was definitely nervous about my press. That was the one lift that I really didn’t think I’d get a PR on (spoiler alert: I did!). 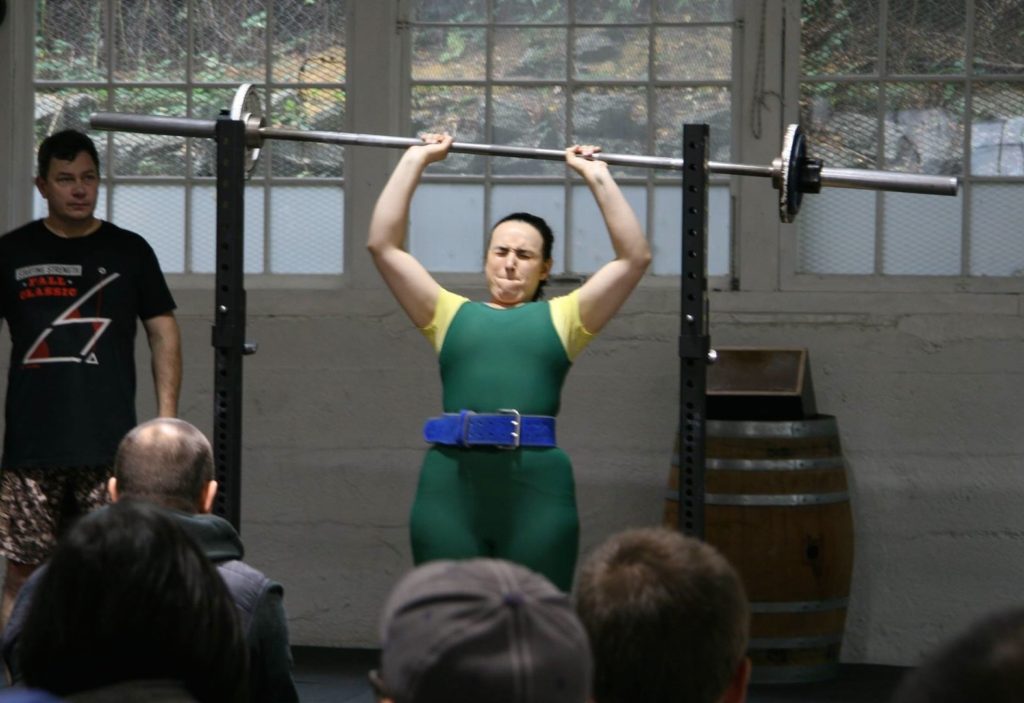 So I know the meet was a big success for you! Tell me about how it went.

It was really an amazing experience. It was an incredibly friendly atmosphere – seemed about an even mixture of complete newbies and folks who had done a few competitions before, which was really nice. I had a bit of an unexpected surprise upon arriving and seeing that the weights were in kilograms…and I had all my attempts written out on an index card in pounds. Some quick calculator math solved that problem, but it did add a little bit of unnecessary stress right at the start.

I ended up going 9/9 with PRs on all three lifts (178.6/75/240.3), which was my goal. My squat and deadlift PRs were, in retrospect, nowhere near true max attempts; my press, on the other hand, was. Still, I felt great about how it all went. It was truly such a supportive and generous environment.

Funny story: a few days ago I looked up the results of that meet. I was certainly way at the bottom of the rankings, but I remember that the only other girl in my weight class at my meet was a BEAST (indeed, she ended up winning the 82.5kg class overall). It felt good to lose to someone so strong, and kind of lit a fire in me. Anyway, her totals (squat/press/deadlift) were: 262.4/90.4/310.9…which it turns out is not that far off from my planned third attempts this year: 255/84/300. Of course, I’m sure everyone else will be stronger too this year; it’s just really cool to see progress laid out so clearly.

I ended up sticking around for the afternoon session to spectate, which was an amazing experience in and of itself. We were lucky enough to have the 1st place women’s finisher and 2nd place men’s finisher overall at the Seattle meet—it was an absolute treat to watch lifters at that level.

After the meet, how did having done it affect your training?

It absolutely made me want to compete again. It was really, genuinely FUN, which I hadn’t necessarily been expecting. Seeing strong people lift—in person—also helps shift what might have once been crazy out-there numbers into the realm of the possible. They are just human, after all. And I’m a human!

You’re all set to compete this upcoming weekend in Gig Harbor at the 2016 Fall Classic. How did you prepare this time around? What are your goals for this meet?

My training was VERY different this time around. Shortly after last year’s meet, I started working with Matt Reynolds for online coaching; he has gotten me even stronger than I would have thought possible. I unfortunately lost about 4 months of training in the Spring due to a stubborn (and surprisingly hard to diagnose) chronic AC sprain, which has still not completely resolved. I’ve done a bit more upper body accessory work, which should help my lagging upper body strength, as well as build some strong and healthy shoulders to minimize the AC issue.

I still struggle with true max effort and “grinding,” but Matt as an experienced outside eye has been invaluable as far as keeping me accountable and making me really push harder than I might want to, while still being realistic and safe. I did a “max testing” week in early September, which was very helpful in terms of selecting my meet attempts. I set a bunch of PRs, too, which was a great confidence booster.

My goals this time are much the same: go 9/9 and set 3 PRs. I REALLY want that 300 deadlift—not coincidentally, it’s the one I’m most nervous about hitting.

Do you have any advice for someone considering their own first meet?

I know that novice lifters don’t often compete, but I’m glad I did. I’m looking at adding roughly 150lbs to my total in a year—it’s like novice training gains, x100000! It also really helped me see the value in competitive sport, which truly I’d never fully grasped before. It’s not about winning and losing, it’s about setting goals, making progress, and then putting that progress to the test in a somewhat high-stakes environment.

I would also recommend signing up with a friend or partner. My husband and I signed up together, both of us never having competed, and it made the whole experience a lot less scary. And of course, it’s way more fun when you have a friend or loved one to cheer for!

Annie’s experience mirrors that of lots of novices. First meets can be intimidating, but an incredibly valuable and rewarding benchmark in a trainee’s progress. The motivation, inspiration, and confidence that comes from stepping onto the platform can not be replicated in training. Even the novice, if given the proper support, can have a positive experience at a meet, and will likely come out a more committed lifter. Starting Strength sponsored meets are an ideal event at which to begin a competitive lifting career: like-minded individuals, exceptional meet direction, and fantastic environments. Best of luck to Annie, the Bay Strength team, and all the lifters nationwide who are competing this weekend.

Big thanks to Annie for sharing her experience with us!