Month of Macros: Good to the Bone

For the tail end of Month of Macros, get cooking with another blog post from the wonderful Sarah Chamberlain:

So you’re at the grocery store looking for your lean protein, and we know the best possible thing would be to buy boneless, skinless chicken breasts. But why are they so much more expensive, even if you’re buying the cheapest chicken you can? Simply put, you’re paying for someone else’s time and effort. Now, if you had some butchery knowledge you could try boning out chicken yourself, but who wants to do that? You are paying for those bones no matter what, so let’s save money and make use of their good qualities instead.

Bones are natural conductors, and help meat to cook more evenly and retain moisture – meaning that you’re less likely to overcook it and end up with dry, fibrous chicken that could double as insulation. If you’re worried about the fatty skin, there is no law that states you have to eat it when the chicken is done – just remove it before you eat. But please keep it on during the cooking process – it will also help your chicken stay moist.

The best and simplest method I know that shows off the goodness of bone-in chicken is this recipe for poached chicken breasts in the New York Times. With this method, a very small amount of effort will reward you with the most tender, perfectly cooked chicken breast, which you can use in pretty much anything. My favorite thing to do is to sauté a chopped onion with a little garlic, turmeric, and garam masala, then mix it with shredded chicken and nonfat Greek yogurt to make curried chicken salad.

If you’d like to try something a little more interesting and exotic with bone-in chicken, you should try my friend Hannah’s jerk. Her family comes from the island of Nevis in the Eastern Caribbean, and this recipe certainly speaks to me of warm sunshine, a tonic in this soggy, miserable weather. A caveat – this is not the Jamaican jerk chicken you might be familiar with, which is grilled over hot flames and is mind-blowingly spicy. Hannah’s jerk is a braise, with its flavors tending towards sweetness rather than heat. But if you’re a real chili-head, you can make your own adjustments! 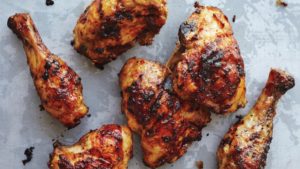 Note: As with most stews and braises, this will taste good on the day you make it, and fantastic the day after. Doubling the chicken and having leftovers is never a bad idea…

2 Fresno chili peppers, sliced crosswise (If you want less heat, cut the peppers in half lengthways first and scrape the seeds and white veins out. Or just leave the peppers out entirely. If you’d like MORE heat, use habaneros instead BUT LEAVE THEM WHOLE AND DON’T POKE THEM AS THEY COOK. If you slice them up and cook them, you will melt like the Wicked Witch of the West.)

1 cup chicken broth (from a box is just fine)

Heat the oil in the pan on a medium heat.

Put a little salt and ground pepper on your chicken thighs, then put them skin side down in the pan. Don’t touch them for 5 minutes, then peek under one of them to see how far it’s browned. You are aiming for a color like oak – medium-brown. Once the thighs have reached that point, turn them over and brown the other side to the same point. Take the chicken thighs out of the pan and put them on a clean plate.

Add the onions and bell peppers to the pan and cook them, stirring every minute or so) until they’re soft and the onions are becoming golden – approximately 10 minutes.

Add in the sweet potatoes, canned tomatoes, and chicken broth, and put the chicken with its juices back into the pan. Add half a teaspoon of salt. Mix everything together, then turn the heat to high and bring the mixture to the boil. Once it’s boiling, turn the heat to low and put the lid on the pan. Leave to cook for 25 minutes.

Taste, and season with lime juice and more salt, if you think it needs it. Take out the thyme sprigs (which will look like sad twigs at this point), and if you used them, the whole habaneros.

Serve up with rice (white or brown both work).

Sarah Chamberlain trains with Bay Strength under SSC Gwyn Brookes. She is a food historian and cook who spends all her time thinking about where her next meal is coming from. When she’s not lifting, she writes about history and culture for the websites Extra Crispy and At the Table. She is also working on her first book, a history of British food culture since 1945.