Perhaps one of the hardest things to know for someone just starting out with strength training is which program to follow. With a surfeit of programs out there, and with all of them seemingly effective at building strength, it can be hard to know which program to select. 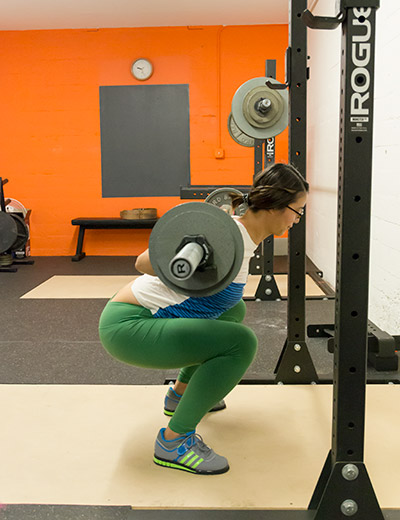 The starting point to understanding why a 3×5 set and repetition scheme is optimal for a novice is an understanding of the stress – recovery – adaptation cycle.

The act of lifting a barbell is the act of subjecting your body to a stress which will compel it to adapt by becoming stronger. Take a novice lifter who enters the gym and on his or his first day squats 65 lbs. for 3 sets of 5. Since this hypothetical trainee is just starting out, those 3 sets of 5 – even of a very light weight – will be a stress to which the lifter is not accustomed.

Shortly after the lifter leaves the gym, the recovery process begins. Over the next 48 to 72 hours, the lifter’s body will carry out a series of processes which will result in the lifter becoming stronger. These adaptations include increases in muscle mass, remodeling of existing muscle fibers, and adaptations of the body’s central nervous system to more effectively recruit and control motor units. Of course all of this is contingent on the lifter doing all the things necessary to facilitate recovery and adaptation, chiefly, eating enough and eating the right things, and getting proper sleep.

At the end of this time interval, the adaptation is complete, and a new stress – recovery – adaptation cycle can begin.

All of the above is straightforward enough. So is this next proposition: the more stress – recovery – adaptation cycles can be carried out in a given period of time, the faster progress can be made.

The logic here is so simple there is not much more to say about it. Someone who carries out the stress – recovery – adaptation cycle three times in a week will make faster progress than someone who carries it out twice, assuming both trainees are making the same jumps in weight each time they train.

How much stress should a trainee aim for in a given training session? The answer is simple: the minimum amount that will yield an adaptation.

Suppose we have two trainees: Zack and Brad. They both go into the gym and begin their workout by squatting. Zack squats 135 lbs. for 3 sets of 5, while Brad squats 135 lbs. for 5 sets of 5. Assuming this is a weight that for each lifter is adequate to spur an adaptation, both lifters will see an increase in strength between this workout and the next one.

But when will Zack and Brad be able to return to the gym to lift again?

Zack will likely be able to return two days later and squat again, this time with 5 more lbs. on the bar.

Brad will also be able to add 5 lbs. the next time he squats. But because he performed 5 sets of 5, it is likely that Brad will need more than 48 hours to recover from his initial training session. He may require 2 or even 3 days between squatting sessions for his next squatting session to be productive.

The upshot of this is that Zack will be able to repeat the stress – recovery – adaptation cycle three times during his training week, while Brad will be able to do so only twice. Over a period of months, Zack’s higher training frequency will result in him gaining strength significantly more rapidly than Brad.

Unfortunately, Brad will not be able to compensate for his fewer stress – recovery – adaptation cycles by making greater jumps in weight, because the adaptation process is rate limited. His heavier training volume will still only yield an increase of 5 lbs. on the bar the next time he trains. 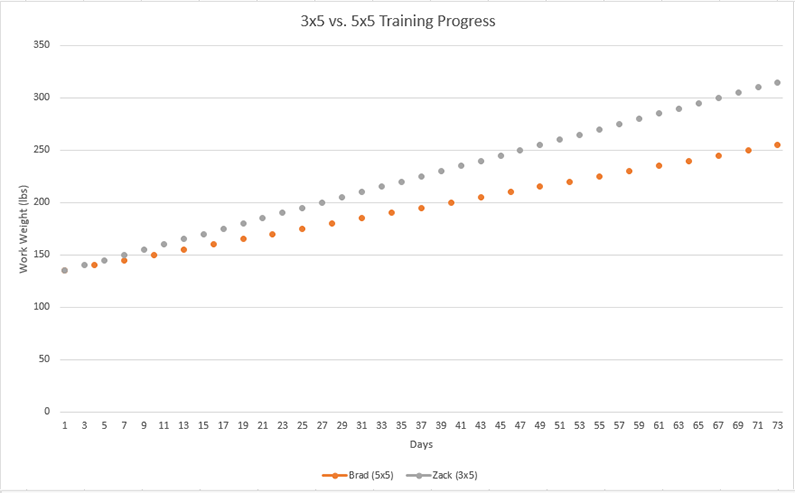 Let’s recap what we know so far.

Given the above, it is hopefully clear why a 3×5 training scheme is most useful to a novice lifter. 3 sets of 5 on the major lifts is enough stress for the novice to spur an adaptation, and is a training stress that can be repeated 3 times in a week for the average novice trainee for several months after they begin training. 5 sets of 5 would also spur an adaptation, but would constitute a stress that will require more time for adequate recovery.

So when is 5×5 appropriate?

Over time, as a lifter becomes stronger, they begin to require more stress to spur an adaptation. It is when this point is reached that 5×5 becomes a valuable and necessary training scheme. The addition of two work sets provides a greater volume of work that provides the additional stress the intermediate lifter requires to become stronger.

The downside to the lifter’s need to move to a 5×5 training scheme is that progress slows. An intermediate trainee that needs to squat for 5 sets of 5 in order to obtain an adequate training stress will also need more than the approximately 48 hours a novice trainee requires to complete the recovery process. Unfortunately, nobody remains a novice forever.